$0.00
Check out Edit cart
Home / Blog / Coffee Education at Origin: Our Roaster Gets a Deeper Look in Guatemala

Coffee Education at Origin: Our Roaster Gets a Deeper Look in Guatemala

Ethan Ryan, our roaster extraordinaire, traveled to Guatemala for the first time in May to meet producer partners at the APECAFORM cooperative, learn about coffee harvesting and exporting, and generally polish up on his Spanish. It was his first time abroad. And his first time at coffee origin.

He traveled with company founder Bill Harris and kept a pretty tight schedule during his coffee tour.

It was a whirlwind coffee tour that left an impression on Ethan, who has been with Café Campesino since 2014. He started as a barista and after one year was promoted to roaster. Ethan knows the ins-and-outs of green coffee ordering, coffee roasting and packing, as well as coffee brewing and extraction. He is very well versed in the United States-side of the coffee industry. But sitting down with producer partners was new. Some of Ethan’s impressions from the trip are captured below in a Q&A-style interview.

What was your most memorable moment from the trip?
Definitely the meeting in Toquian Grande. Farmers were notified by word-of-mouth and cell phone that we were coming, and they slowly trickled into the meeting over the course of half an hour. It is a community of about 500 families, and there were probably 20 people at the meeting. Even though  Coop Coffees and Cafe Campesino have visited other communities that are a part of APECAFORM, Bill and I were first coffee buyers this particular community had ever met. Up until that point, the farmers didn’t really have a clear idea of what happened to their coffee after it went down the mountain. As transparent as we are, there’s still a long way to go in terms of connecting the community of growers to the community of buyers.

There was also this idea that should someone come to visit them it would be to say that the quality wasn’t good enough or that the price they were to be paid was going to be lowered. For these farmers, getting bad news about their quality means less income for that year and thus fewer resources. After speaking very carefully with both the farmers and APECAFORM’s technico, Marco, they slowly realized that we were visiting as friends and business partners, not as judges or the bearers of bad news. 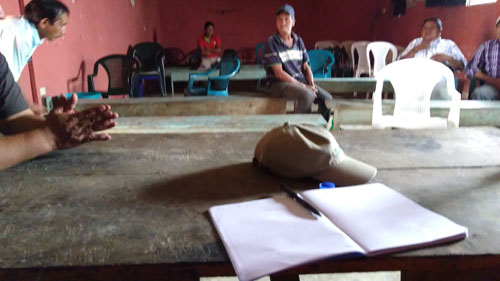 How did it change your perspective on the coffee industry?
I realized that all of the work comes before roasting - that while we may feel like we have long days in the roastery or long days behind the bar, it doesn’t amount to much when compared to the constant stress and work farmers go through to make sure their plants are healthy and well cared for.  It also opened my eyes to the effects of climate change. Climate change is inconvenient to us, but for farmers it’s a gradual deprivation of livelihood.

Tell us what it was like to follow around Marco, a technico, with Manos Campesinas?
As a technico, Marco is responsible for helping farmers understand how to improve their current systems to meet organic standards or improve their yields. Some of things he pointed out included:

- Moving a small branch that leans up against a tree, so insects wouldn’t crawl up it
- Keeping the base around the tree clean, so there’s no insect breeding ground
- Explaining how the color of the tree leaves might show a lack of nutrition in the soil
- Helping farmers understand their potential return on investment- how much it would cost per “cuerda” to improve their soil
- Explaining that the devastating fungus, la roya, spreads more easily when plants are closer together

We also visited an APECAFORM test plot where a young farmer named Hugo was undergoing an experiment in which he cultivated six varieties of coffee to see which plants offered the best yield and quality under similar conditions. Ultimately, he hopes to inform his fellow members which two varieties would perform best in their area.

What was it like at the Dry Mill?
Visiting the Dry Mill in Malacatan was an interesting experience - it’s where the processing from peragamino to oro (green coffee) takes place. We were greeted at the entrance by armed guards and the plant manager, who guided us between walls of coffee bags to the factory proper. Only about seven people worked in the facility where tens of thousands of pounds of coffee passed through a string of intricate machinery which dehusked the pergamino and sorted the oro by density, color and size. And each of these processes was done twice on each batch to ensure that no coffee was wasted and that they didn’t miss any bad beans. 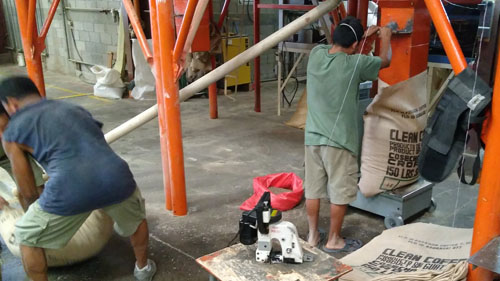 Has the trip changed you in any way?
It’s certainly made me realize how much easier life is for some of us here in the United States. The air quality in the cities of Guatemala is horrible due to insufficient environmental regulations, and many of the families in the mountains use wood burning stoves with little ventilation, meaning that the mothers and daughters develop breathing disorders at a young age. On top of this, the water supply is unsafe and electricity is inconsistent at best. All these problems and more instill in me the desire to offer more to our trading partners, both in Guatemala and in other parts of the world. Everything that they do makes everything that we do possible, and that is our debt to repay. It’s not charity - it’s justice.

APECAFORM stands for Asociación De Pequeños Caficultores Orgánicos Maya-Mames (Association of Small Organic , Maya-Mame Coffee Farmers). It is a group that was founded in 1992 with the help of the Guatemalan Catholic diocese in an effort to stimulate local, small-scale coffee production. The co-op has about 400 members in 17 communities near San Marcos, which is located near the Mexican border state of Chiapas. APECAFORM works with Xela-based Manos Campesinas to export its coffee. Manos Campesinas sells APECAFORM’s coffee internationally, as well as in Guatemala at its coffee shop and roastery, Café Armonia. Located in Xela, Cafe Armonia is operated by the children of coffee farmers and sells exclusively coffee from Guatemala’s “pequeno productores” (small producers).